Bike Box Hire Take the hassle out of your cycling getaway. Learn more

30 Days Free Insurance On all bikes over £400. Learn more

We accept Cycle to Work Schemes

Get the perfect fit - Bike Fitting 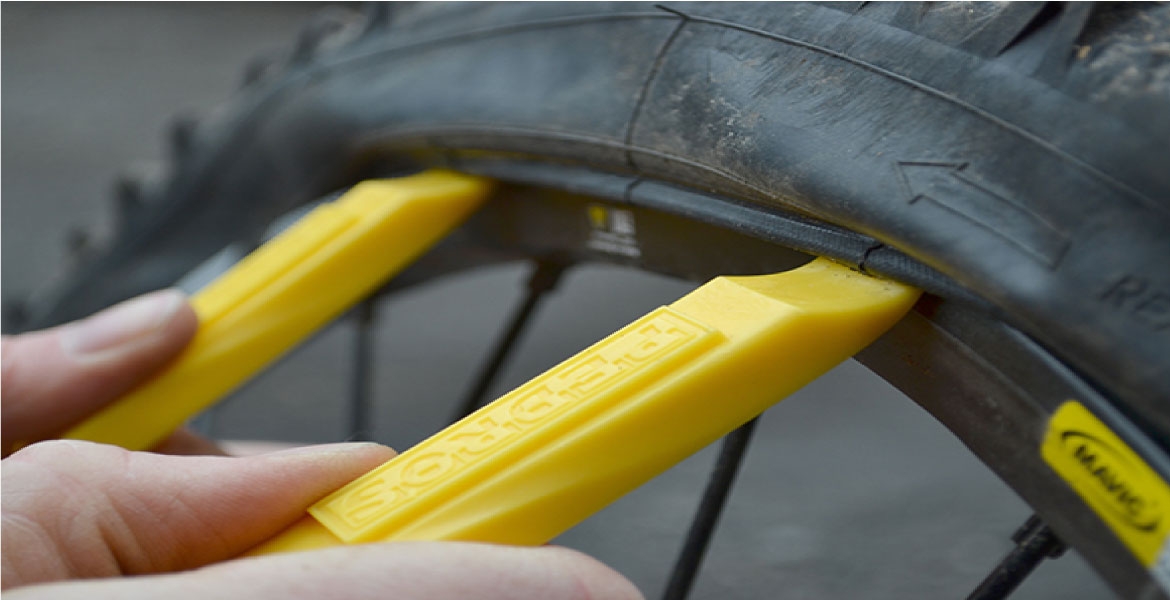 Welcome to the third post of a series of blog posts offering great tips on what to take with you on the trail and how it could save your ride.

These fantastic tools should be in the pocket of every cyclist and not because it makes changing a tube a lot easier because let’s face it no one is using tubes anymore if the industry is to be believed, but because of the versatility of them. Don’t believe me? Well good, that’s what this third entry to the blog is for. Here are a few reasons why tyre levers should be included in your riding bag.

Let’s start with crashing straight out of the gate it happens for some more often than others and a lot of the time you put your hands out to break the fall which puts your fingers in harm’s way. Tuck and rolls can often end in dislocated or broken fingers, tyre levers make great finger splints to keep that finger straight and set in place. A shoe lace or a bag strap is usually best used to secure it over a zip tie because of the possibility of swelling.

Modern brake levers do not seem to suffer from this as much as older generations, probably because crashing is factored into the design of brakes nowadays. They are not immune however and can get bent or twisted, instead of relying on your one good brake to get you back use a tyre lever and zip ties to temporarily replace or offer some reinforcement to that damaged lever.

Ride in any other European country and at the end of the ride you usually find yourself being handed a bottle of beer. Over in the U.K however we tend to end rides at a pub so don’t really have a need for a bottle opener. But if you do find a cold bottle in your hand it is nice to know that a tyre lever is right there to pop the top off.

This one is self-explanatory after a long boggy ride especially in the winter months you seem to add an extra 4 kg in mud alone. Whether that be on your shoes or in the little nooks and crannies on your frame the long levers are great for scraping and poking all that muck out.

If you have swollen feet from that trail pump, can’t tie your laces with gloves on or just simply don’t want to touch you old unwashed riding shoes tyre levers make a great shoe horn, especially plastic ones. Just use the flat end and not the hooked end that could be quite painful.

Some parts of the trail are better coming down than going up especially those parts you scope out and realise there is no other way of getting up there apart from climbing the slope. It is a slippy awkward climb with a bike on your back but if you put the tyre levers between your fingers you can get some extra grip from your faux claws wolverine style.

The little hook you find on the end of tyre levers is originally designed to hook onto the spokes and keep it in place while changing a tyre, but it is also the perfect size to push that little valve in the middle of a Schrader valve making deflating a tube a breeze. As mentioned previously though inner tubes are a dying breed especially Schrader valve tubes.

It is so frustrating when a new product comes to the market and it requires a specific tool to fit and remove yet it seems to happen more and more often in the bike industry. At least Shimano have stuck with the Hollowtech II system long enough to make it worth investing in the cap tool. But for me it lives with the BB tool and not in my backpack where I could lose it. In the rare chance the cap comes loose on the trail or the cap needs to be removed it is safer and much cheaper to use Tyre levers. They are just about wide enough to wedge in there.

Most good rides have a tea break especially if you are from the North, back packs are useless unless they have room for a thermos and trail centres are ranked based on their tea vans. Problem is with all that hard riding you sometimes need a little bit of a kick so an extra sugar is called for, use a tyre lever to stir it up and jobs a good un as they say. Just check you did not use it to scrape down your shoes the week before.

Harder riders will know the woes of this hitting a jump, rock garden or even just landing a drop awkwardly, first you feel the kick then the rubbing of tyre or brake followed by the weird jelly like feel from the back end. If you are lucky it is the wheel coming untrue slightly in which case Levers can help however if the wheel resembles a taco then you are out of luck. Zip ties and tyre levers are your friend for the former using the chain stays and two levers to fashion a 'not so crude' actually truing tool. Just pray that someone in your riding crew took a spoke key.

How To Set-Up Mountain Bike Suspension

How To Adjust Saddle Height

Are you sitting comfortably?

A Guide To - Chain Lubes